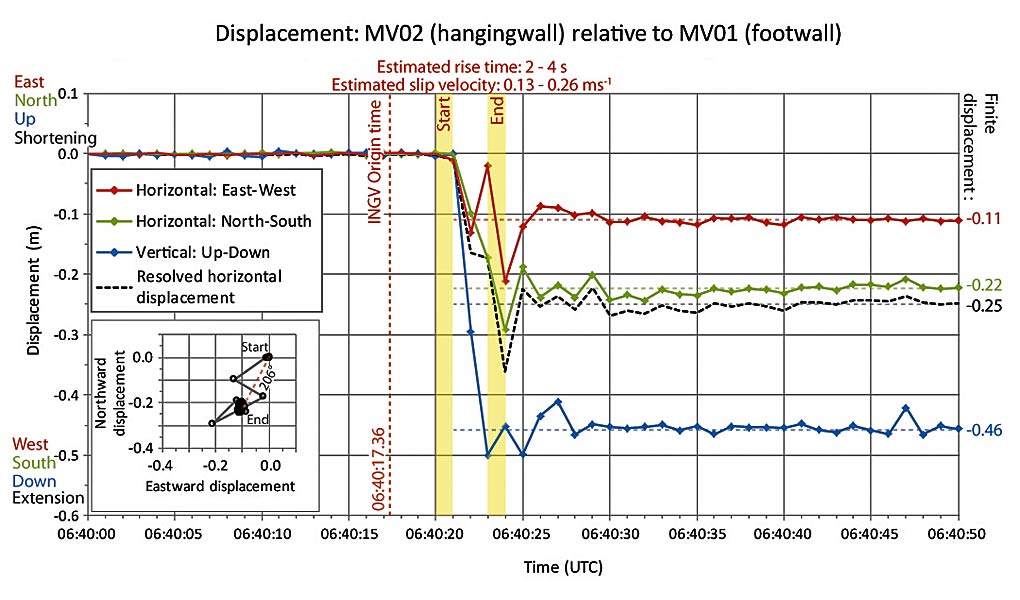 Published today in the Nature journal Scientific Reports – more scientific outcomes of our work using GNSS (i.e. satellite constellations including GPS) to monitor ground motion associated with recent large earthquakes in central Italy. The image above shows 50 seconds of time-series data from a single pair of low-cost GNSS receivers, positioned in the hangingwall and footwall across the Mt. Vettore fault, showing their relative motion experienced during the Mw 6.6 earthquake on 30th October last year. Recorded components of relative offset at this locality were ca. 11cm (east-west), 22cm (north-south) and 46cm vertically.

The very high temporal precision of the GNSS data shows clearly that fault offset at the surface initiated well before peak ground acceleration was reached at the nearby strong motion seismograph station “IT.CLO” at Castelluccio (see image below). This is really significant, as it sheds new light on a major controversy among seismologists, providing compelling evidence that new surface ruptures that were mapped on the flanks of Mt. Vettore in the days following the earthquake were the direct result of capable faults propagating from depth during the seismic event, and not the effects of delayed mass wastage (landslip) processes as some scientists previously believed. This has important implications for assessing and mitigating seismic risk across the region. We have also deployed this technology in commercial monitoring scenarios, and in other regions of active tectonism (including New Zealand), and we’re now able to offer GNSS services to support further research projects. 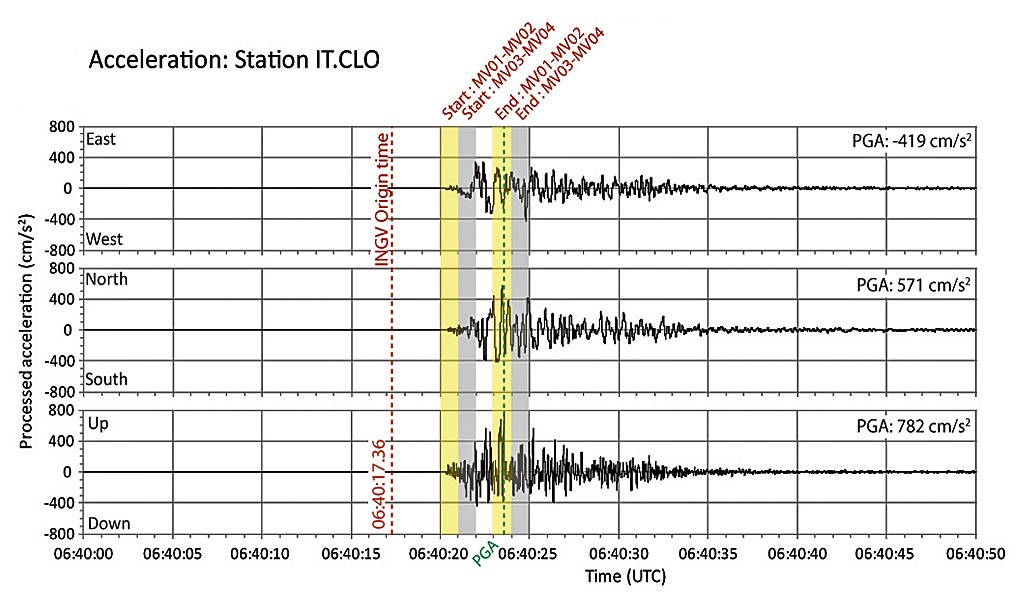 The work that’s appeared in Scientific Reports follows a long legacy of publications from a team of researchers from Birkbeck, Durham, Edinburgh, Leeds, Sheffield, and UCL in the UK, working in close collaboration with Italian colleagues at DPCN, IAMC, IGG, INGV, ISPRA, Camerino, Chieti, Como and Trentino, as well as other European universities in Athens, Bergen, Cologne and Uppsala. This legacy includes recent publications led by Luke Wedmore (GRL sponsored PhD) and a seminal review paper led by Patience Cowie, and there are plenty more papers in the pipeline.

As part of our ongoing R&D we’ve recently made a number of technological improvements to the GNSS units since the first deployments in 2015, including dual frequency units recording data at up to 20 locational positions per second (instead of single frequency units and 1Hz data), and fully-autonomous solutions based on independent power supply and remote upload of data to a central server.