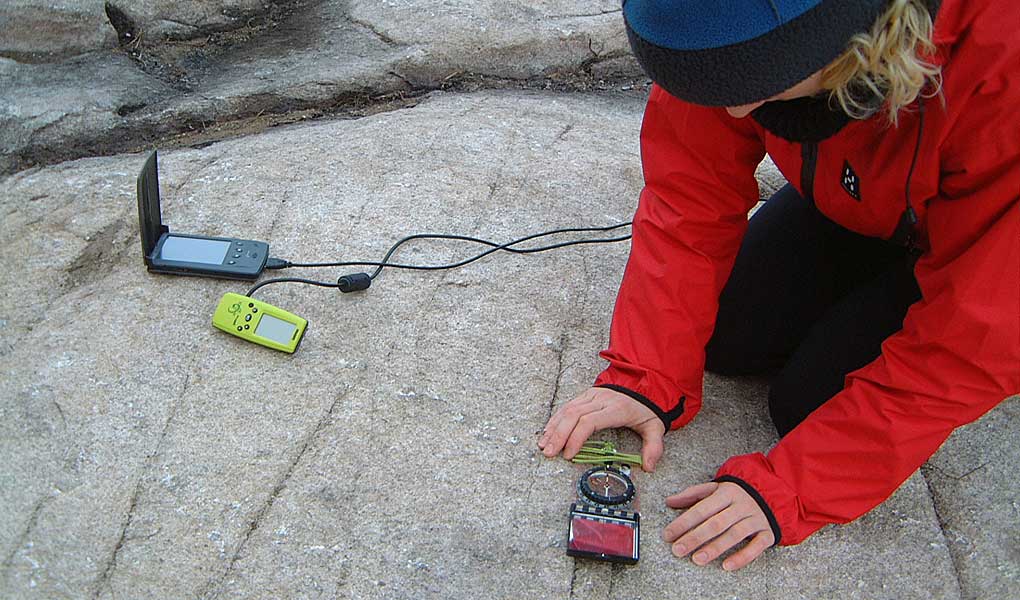 Back in the final year or so of the last century, a group of us were field-mapping in a complex transpression zone (see here, here and here), on a fantastic coastal section, well above high water mark (dry feet, baking Scottish sunshine … glorious!). During a lull in the proceedings Ken McCaffrey produced from his pocket a new-fangled gizmo that purported to know our exact position by communicating with some kind of global satellite system. There was much mirth (and no mercy given) when the device booted-up and duly declared our location to be 100m offshore in around five fathoms of water … but despite this inauspicious start, within a couple of years we were all true believers in the potential of GPS, early funding from NERC was secured via the Ocean Margins Link Project, and our part in the geospatial revolution was underway. That was fifteen years ago – before Google bought Keyhole Inc. to create Google Earth, while GIS was still very esoteric and mostly run on workstations, and when GPS was the only available satellite navigation system!

That momentum led to the formation of Geospatial Research Ltd. in 2004, kick-started with venture capital and helped by further NERC support in the form of a Follow-On Fund award to Durham University. That impetus provided a catalyst that has since allowed us to employ 31 people in total (42% female, 58% male), support dozens of Doctoral and Masters students, to generate millions of pounds of revenue (taxed in the UK), and to plough this back into more than 250 research outputs.

Today, a couple of decades after Ken suggested that satellites would be an important part of future field geology, the USA-owned GPS has expanded into a multi-national GNSS network. And now totally integrated into our regular fieldwork routines, we use GNSS units to georeference virtual outcrop data from lidar and photogrammetry, our UAVs have GNSS to guide their auto-pilot systems, our field cameras and mobile devices have GNSS receivers so that photos and field measurements are geo-referenced automatically, and we have a large pool of low-cost GNSS units that are ready to deploy for detection of ground motion related to autonomous monitoring of critical infrastructure, earthquake monitoring, volcanic hazard, and more.

And that’s only GPS – just one part of the geospatial revolution in the 21st century. We’ve seen similar advances in Earth Observation, geostatistics, multispectral and hyperspectral imaging, interferometry, spatial processing methods, data analytics, 3D outcrop surveying, and others. Where will the next two decades of geospatial innovation take us?