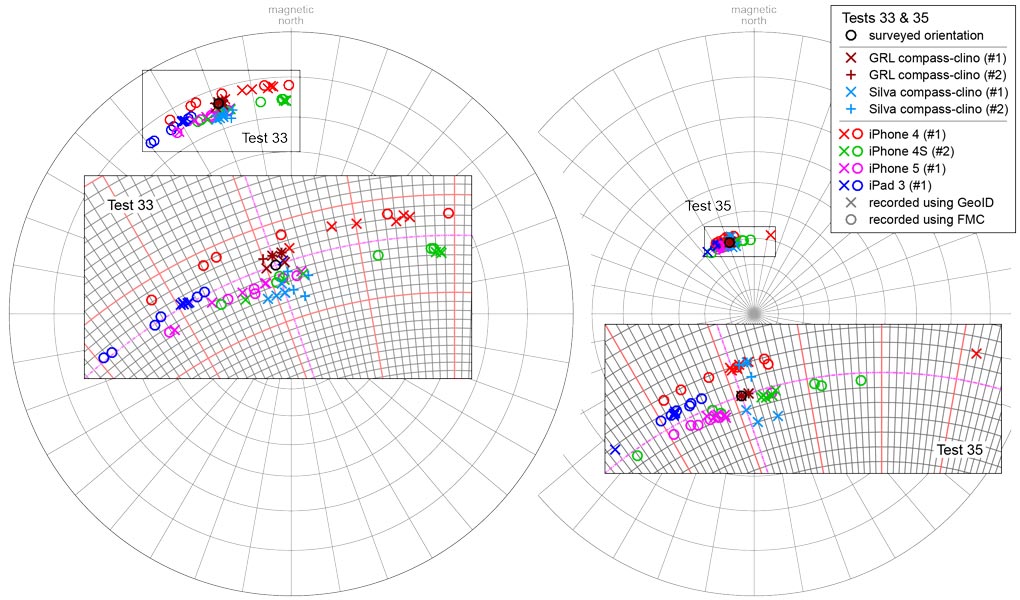 We’ve long been advocates for the digital acquisition of field data (e.g. see here, here and many more here), so the arrival of compass/clino smartphone ‘apps’ got us quite excited – not least for our analysis of fracture networks, where we typically make thousands or tens of thousands of individual orientation measurements. Digitalisation promises massive savings, both in the time needed to take each measurement and especially in the time saved when downloading data in bulk rather than manually transcribing each measurement into a spreadsheet. If you’ve ever had to endure this manual copying of thousands of data then you’ll understand just how excited we were!

So around 2012 we carried out some quick tests – just to double-check that all was ok with our brave new digital world. Initial results with both Android and Apple smartphones were rather mixed (pretty rubbish actually, especially with Android). So we focussed on iPhones, did some more tests, and then some more. The main problem was (and still is) that we found it difficult to get consistent results. Sometimes we saw pretty good precision, but other times results were frankly dreadful, and it wasn’t clear what was the main cause(s) of this irregularity.

By 2013 we had refined our workflow and included a careful checklist to follow before, during and after field acquisition. We only managed to get adequate results measuring dip and strike of planes – we’ve never got usable results when measuring lineations. And we’ve never considered it a valid tool for typical field mapping – just for fracture studies of individual outcrops. We’ve variously tested nine iDevices (2 x iPad 3; 3 x iPhone 4; 2 x iPhone 4S; 1 x iPhone 5; 1 x iPhone 7). We’ll maybe do further tests with more recent models of iPhone – though it seems unclear that the newer MEMS sensors will radically improve results.

One of the more surprising things about all this is how little testing has been reported, either in the formal scientific literature, or informally on the internet. We’ve love to hear from you if you’ve carried out systematic testing and got consistently good results!