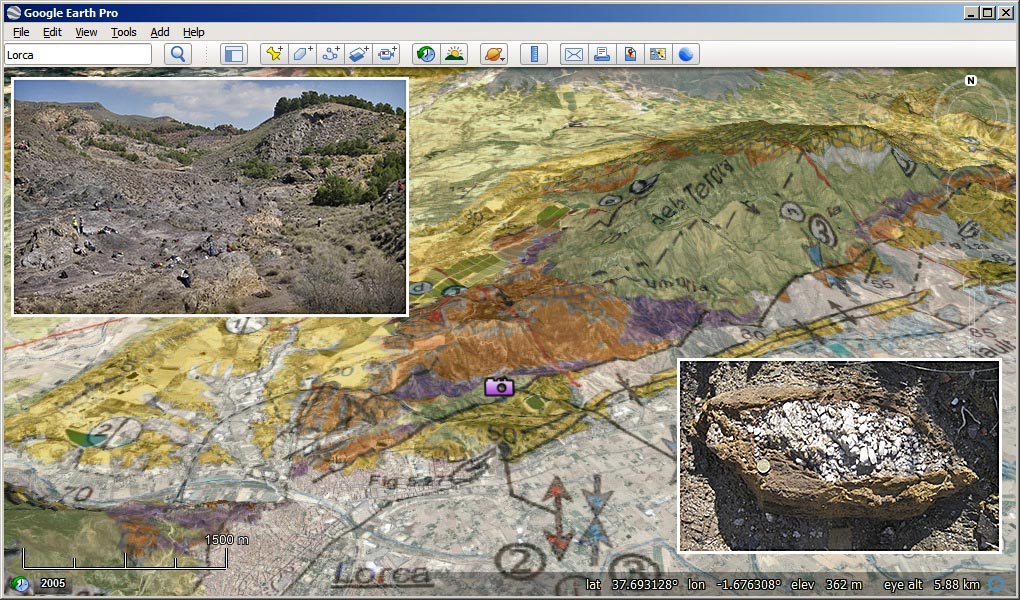 There’s so much great geology to see via Google Earth! Areas of active tectonism often provide some of the best case studies for demonstrating the close relationship between landscape and geodynamics. This month we’ve helped colleagues in Earth Sciences at Durham University to run a virtual fieldtrip to the Betics in southern Spain, using Google Earth as the central platform. Superimposing the modern plate boundaries, plate motion vectors, seismicity records, and dozens of georeferenced geology maps and cross-sections onto the Google Earth topography really helps to show the link between Atlantic & Tethys geodynamics, regional tectonics, complex 3D structure, creation of accommodation space, and the basin sediment fill.

One of Google Earth’s real strengths is its versatility. While it’s great at the continental to regional scale, it’s also often highly suited to span more local scales of observation. The screenshot above is one of many virtual localities in which we combined outcrop photos and other datasets with draped geology maps to help expand the fieldtrip experience from regional to outcrop scales. This example is a fantastic transpressional pop-up from the Eastern Betics Shear Zone at Lorca. The upper-right field photo is looking NE along a steeply dipping sinistral oblique fault zone that marks the southern flank of the Sierra de la Tercia; this is a basement block (purple/orange/green on the Google Earth drape) that is thrust southwards over the Neogene sediments of the Alto Guadalentin Basin SE of Lora. This thrust was the site of a Mw 5.1 earthquake, attributed by González et al. (2012, Nature Geoscience) to lowering of the water table related to intensive agriculture in the region (one of many possible human-induced events recorded in the online HiQuake database compiled at Durham).

Sometimes the digital elevation model (DEM) incorporated in Google Earth is too poor to capture the interplay between the geology and the outcrop scale top topography. Then we need more detailed outcrop data – the example shown below is one of many large panoramas from the ongoing PhD work of Gustavo Lobato at Durham. 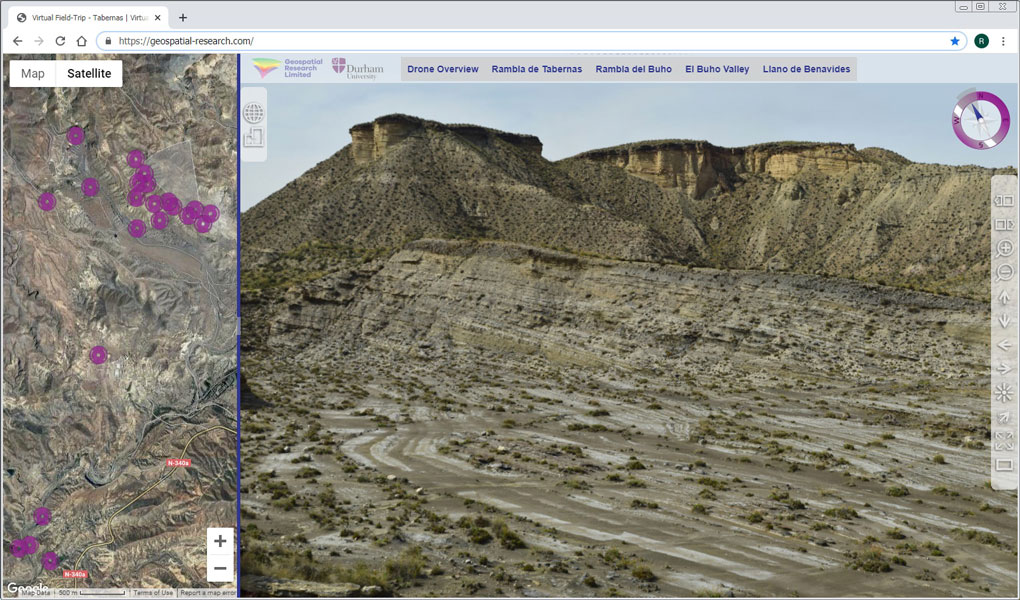 Turbidites at El Buho, Tabernas – one of many outcrop panoramas from the PhD work of Gustavo Lobato at Durham